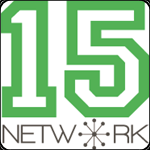 Bingo sites on the 15 Network are all very bright, colourful places to play at, with some generous bonuses, a good range of 90, and 75 ball games, and plenty of slots, scratch cards, table games and instant win games to enjoy.

Like most other bingo networks, 15 Network provide their sites with central customer support and Chat Moderator backup, as well as banking facilities and licensing agreements, allowing bingo sites to start up secure in the knowledge that these important functions are being handled by an experienced team.

15 Network are licensed in Alderney, in the Channel Islands, are subject to the strict regulations laid down by the Alderney Gambling Control Commission, ensuring that games are operated in a manner that is completely fair to the players, that players funds are securely handled, and that payouts are made promptly and in full. Games are all independently audited by SQS, one of the world’s leading specialists in software quality. They also hold a valid operator’s licence with the UKGC and as such, they are able to run their network and offer “white label services” for bingo and casino games.

With thiry-five brands using the 15 network, it is far from the biggest bingo network in the world. However, the 15 Network is a very new bingo network, and they have plans to add more bingo sites in the near future. The 15 Network uses Jumpman bingo software and each site residing on their bingo network is fairly typical of what you can expect from their other network sites like Spice Bingo, Charity Bingo, Rovers Bingo, and Zingo Bingo that are all part of this group.

As soon as you get to a 15 Network bingo site, you are struck by the colourful designs, with pleasing cartoon like graphics and some very prominent bonus offers. Signing up at Spice Bingo took all of about three minutes, although there was a limited range of payment methods available, namely Visa debit, Visa credit, Visa Electron, Maestro, MasterCard, Switch, and Solo. Most people will use these methods anyway, but it would have been nice to see them accepting bank transfers, or Moneybookers, as not everyone has a credit card.

All transactions are securely carried out using up to the minute security software, so your details are well protected from anyone else, and your funds will remain safe. You can deposit as little as £5, with the money being instantly credited, although withdrawals are a £30 minimum, and although Spice Bingo process withdrawals in 48 hours, it can be a few days before the funds appear back in your bank account.

The bonuses tend to be similar across the 15 Network range, and are in line with what you will find on most bingo sites, but I particularly liked the Charity Bingo pledge of 10% of every deposit going to their charity of the month. I also like the offer of extra bonuses, which you can win by spinning a bonus wheel, which can get you up to £2500. A 50% bonus on every deposit is also something that stands out from the crowd.

On the 15 Network, the bingo games themselves are held in a limited number of rooms, with four 90 ball rooms, and two 75 ball rooms. Thus, you will not have a massive number of games to choose from. I actually quite like this, as some bingo sites have a confusing number of games running all at the same time, and you never know if you have chosen to play the right one. With 15 Network bingo sites, you also have fewer players competing for the same prizes, and a bit more of a family atmosphere to each game. The number of other players is “enough” to give you the feel of playing with a full house, but not so much that it seems overwhelming.

I started with a 90 ball game in the Lucky Stars room, where our Chat Moderator, called Bluey, kept players entertained, and congratulated winners. With 12 players competing for a £37 prize, I thought I stood a good chance of winning. The game itself was well presented, with the cards in a vivid pink colour, while buying cards was done in just a couple of clicks, and you can either click on the individual cards that you want to play with, or select a whole row, or all cards.

Once play was underway, the chat was fun, even with just a few of us playing, and although I did not win this one, it was still a well-presented game – with nice animations, and a professionally run chat function.

The 15 Network bingo sites have a number of jackpot games on offer, with prizes ranging from the Daily Dashs’ £25, up to a monthly £2500 game, and these tend to get more players than the regular games.

I am a big fan of playing slots and side games at bingo sites (on top of playing bingo). I often find that this area is somewhat neglected when the site is being developed. I am pleased to say that 15 Network have provided many games that you will not find on the mainstream sites, so if you are looking for something different, this is a great place to go.

Slots games include the 100 line Amazon Wild, where a fun bonus round lets you find treasures hidden behind ancient temples, and Ramasses Riches, where you can win up to 20 free spins, with all prize values tripled. I had a go at Ramasses Riches, and managed to get a profitable free spins round, plus a good bonus when the ‘wild’ symbol replaced other symbols to create a win.

Other side games include Roulette, Blackjack, and Ultimate Texas Holdem Poker, and each of these games used high quality software with realistic looking tables and smooth animation.

Being fairly new, 15 Network have done very well to get these bingo sites running successfully in a short time, and as more sites join up, and so get more players, I have no doubt that they will be a network to watch.

Overall, I had a favourable experience when playing on Jumpman’s 15 Network software. Their bingo software hits the mark and is still newer. However, the 15 Network is growing in popularity. They still have a long way to go in coming close to the numbers that Dragonfish, Virtue Fusion, and other large bingo networks produce. With that said, if you are looking for a fun and more intimate setting for playing bingo and slots games – the 15 Network might be the ideal software for you.

We initiate coverage of the 15 Network and their Jumpman bingo software with a “B” rating. As the Jumpman software expands – both in number of games you can play and in traffic, we are fairly certain that this fun, unique, and regulated bingo software network will see its ratings rise. Rest assured, we are fans and very much look forward to that day.